You may not have heard of this organisation.  It was set up in 2008 by a Christian from LCF. Karen Godfrey was a Drug and Alcohol worker who saw that her service did not work for the women she saw. Services were delivered for men and women together, and often the problems in which women found themselves resulted from poor relationships with men. Many of the women had children; where would they go whilst women were in medical or legal appointments?

Karen resigned her job and set up Stepping Stones (SSL).  Initially she had one helper and together they borrowed a room at Luton Christian Fellowship and began seeing women. Friday mornings quickly became popular – Coffee, Cake and Chat, a free drop in where you could meet women in similar circumstances. Initially SSL offered key worker assessment and support, counselling, parenting courses, and Karen began to devise courses on building confidence and self-esteem.  Key workers would attend court hearings with the women when they were under threat of children being taken into care, or help get them returned. The work was fluid and responsive. Although run by Christians and on LCF premises, it has never been specifically a Christian organisation, and it has always been open to any woman.

I have been a committee member from the early days but the work rapidly grew and space at LCF was insufficient.

We moved into a building in the centre of town, with a garden. There are rooms for groups, and smaller rooms for offices and individual meetings including counselling. There an Ofsted-approved childcare area with access to a safe playground outside.  We formalised the committee and I became chairman of the community interest company.

The growth in the organisation was exponential after the move. In the first six months we had over 400 referrals.

After the initial reach to women with problems of addiction, many came from abusive relationships, some with terrible stories.  Later we were asked to take low risk women on probation. Whether they were self-referrals, or sent by social services, prison, probation, mental health services, or the police women’s diversionary scheme, the needs were similar.  The women had been crushed by life circumstances, responding to this in different ways.

New courses were introduced: anger management and managing abusive relationships; a local legal firm offers a fortnightly free drop in on our premises and we employed an education, training and employment worker.

Finances became a real problem and we converted to being a charity for wider access to funds.  Karen moved and on and we employed a new CEO. There are now 18 staff members and in 2016 we worked with over 500 women, their children and families, with 275 new referrals received.  We are now a charitable company; I am still the Chairman and love the fact that we are making a real difference in Luton. Please do ask me for further information or if you would like to support in some way. 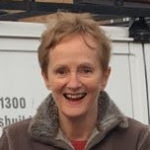