For the past 25 years, trying to gain an understanding of a particular element of the suffering caused by man’s humanity to man has played a key role in my walk with God.

Has there been any more poignant example of man’s inhumanity to man, at least in our culture, in our times, than the Holocaust?

Aged 16 and studying Religious Education for GCSE, it was a school trip to the main synagogue in Manchester that sparked a fascination with the Holocaust that is as vivid today as it was then. Even now, I remember standing numb with shock and sorrow before the iconic photographs of the time, blown up and exhibited on the walls. One image in particular, that of the mother shielding her baby whilst an SS officer aimed his rifle a meter from them, sent me into a stunned silence that remained for the duration of the journey back to school. On that coach, we were a very different group of pupils to the ones who had sung and sneaked the best parts of our packed lunch into our mouths on the way there.

My first action following this initial exposure to the horrors of the Holocaust was to present myself at Waterstones, asking to be directed to everything I needed to read to learn more. What followed was months of devouring every book I could get my hands on, poring over the accounts of survivors like Primo Levi and Eli Wiesel.

The ensuing years saw the fascination grow: a degree in French studies entailed a year in the city of Lyon, the centre of the French resistance, and for my dissertation I interviewed surviving members in their homes; a spell of traveling in Western Europe saw a visit to Dachau; a summer at a kibbutz gave the opportunity to come face to face with elderly Jewish members who still bore their concentration camp numbers on their arms in the Israeli sun. Words don’t exist to express how humbling each of those three events were.

This was surely one of the most bizarre points in my life, though, for while all of this was happening, God was beginning to ‘romance’ me. Having never known him, I was now starting to have very real, very personal and undeniable experiences of him. It was a confusing time. On the one hand, my knowledge of the Holocaust was shaping my understanding of suffering: the more I knew, the more accounts I read of the horrors, the more angry I became. On the other hand, the reality of God as a being, who spoke, lived, supposedly loved, was becoming harder and harder to ignore. It was a strange juxtaposition for someone in their early 20s to find themselves. If this God existed, if he really loved the way the Christians I was meeting said he did, then how could he allow the suffering I was reading about to take place?

Eventually, though, I could no longer deny that the anger I felt wasn’t towards God as a concept. It was towards God as a person. I was using the Holocaust as my reason for not coming to him. How did I know I could trust him? How could I make myself vulnerable to someone who could let such a thing happen? It flew in the face of everything I was being told about him. I wanted his answers, his excuses, even, before I could risk letting him into my life. Surely we deserve that much?

I think, though, that once we experience God as a very personal, very real being, we have come to a crossroads. We realise that, actually, we don’t deserve that much. We realise that the choice to accept or reject him is in our hands. We realise that, unless we accept that we may never get answers to our questions this side of heaven, we could be missing out on something amazing with him. Personally, I decided to take that chance. I decided that, just because I didn’t understand him, that didn’t mean that I could deny him.

These days, I’m still as passionate about the Holocaust and anything Third Reich related. My husband likes to tell the story of how, a couple of years ago, we visited Berlin. The grandparents had the children and it was our first time alone in a very long time. He had visions of a romantic weekend, only for me to insist on spending half of it in the Gestapo museum. But the difference in the me in my mid 40s and the me of 25 years ago is that, because I was able to overcome the anger and questions that were holding me back, I’ve come to know God. I’ve come to know that he doesspeak, he does live, he does love with reckless, ridiculous abandon. I’ve come to know that not one question I have for him, to which I may never know the answer, is more important than that. I’ve come to know that all of that is true regardless of whether I understand him or not. 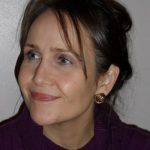